Last week, we hosted another webinar to talk about Gitora and how it helps Oracle developers manage their PL/SQL code base. Below are the slides we used during the webinar:

You can watch the recording of the webinar below:

It’s been a little over three months since we released Gitora 2.0 and the first success stories have already started to surface. Here is one of them:

Rhenus IT uses both Java and PL/SQL to serve their users and customers. They have a team of about 10 PL/SQL developers. The team manages more than 20,000 database packages, views, functions, procedures, object types and triggers spread over 30+ database schemas.

Rhenus IT wanted to move to a continuous delivery environment in which they can be more agile and deliver solutions to the business faster. Managing the PL/SQL code was the hardest piece of the puzzle.

After experimenting with other solutions in the market, Rhenus decided to move forward with Gitora. 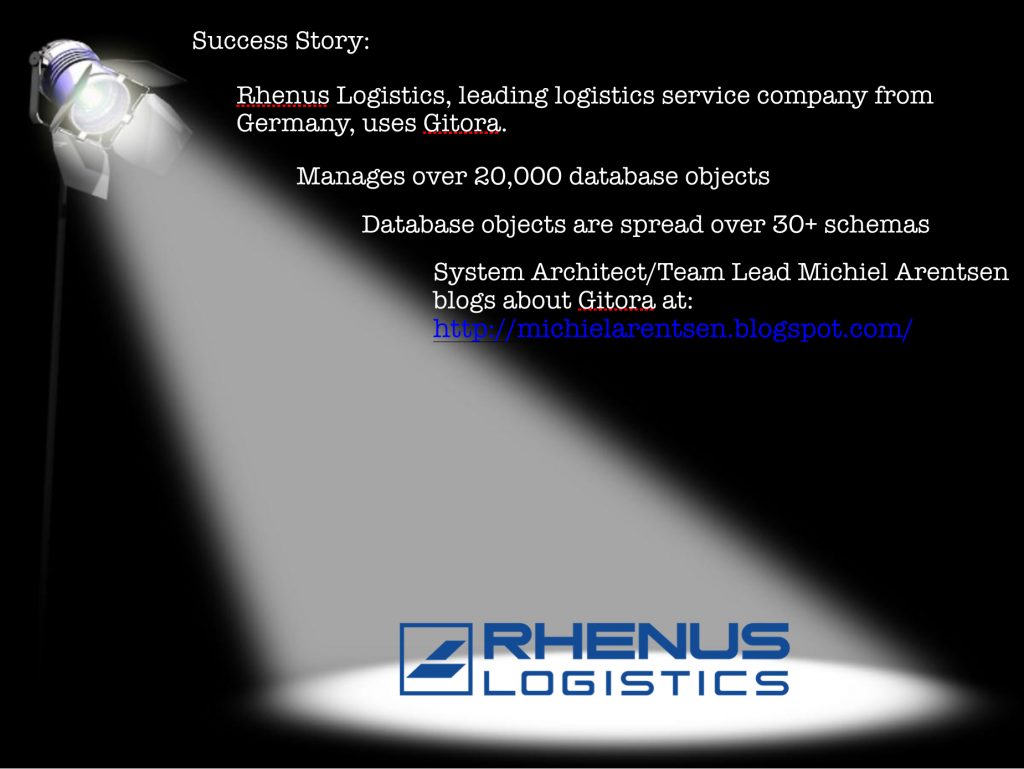 Michiel Arentsen, the System Architect at Rhenus who implemented the solution at Rhenus has started an excellent blog in which he writes about his Gitora implementation. We highly recommend you to check it out. Below are the list of blog posts he wrote which should be very useful to anyone who is currently implementing Gitora at his/her company:

Automatically log in to Gitora when connecting to Oracle

Start Gitora as a Windows service

OK, so you read the web site, downloaded Gitora, installed it successfully, created a few test repositories, added a few packages, issued a few Git commands from the Gitora UI. And it all works fine. But now what? How do you actually start using Gitora in your development life cycle? How can you actually benefit from it?

In order to show you how you can use Gitora in your daily work we are hosting a free webinar on November 22nd. You can register at: http://www.prohuddle.com/webinars/Gitora/Version_Control_for_PLSQL_Developers.php

During the webinar we will cover the following topics with a live demo:

The webinar is free but space is limited. Sign up today.

Today, we are happy to announce the general availability of Gitora 2.0. We listened to the feature requests coming from the community and we think we are addressing the majority of them with this new version.

Gitora now supports Object Types. Object Types are supported for the Oracle version 11g and above.

Clone Source Code from Another Database

Gitora 2.0 supports cloning Git repositories from remote databases. Connect your local Gitora to the remote Gitora (which manages a remote database) and move the code base from one database to the other automatically.

Similar to cloning, developers can now pull(merge) source code from a remote database to the source code in a local database automatically if both database are running Gitora 2.0.

Many small improvements and bug fixes

Gitora 2.0 also comes with a number of improvements such as:
– A nicer Git repository browser
– Ability to view changes made in each object prior to issuing a commit
– Cancel any edits made to a PL/SQL object since check-out by clicking a button.

Every feature from Gitora 1.0 continues to be free in Gitora 2.0 Community Edition. We even added new features to it such as object type support, ability to view changes made in each object and canceling edits, along with many bug fixes.

We believe proper version control is a big problem in the PL/SQL community, hurting the productivity of many PL/SQL developers and discouraging organizations from using PL/SQL. We think we can help. In order to justify further development on Gitora to help the community to solve this problem, remote database features in Gitora 2.0 will be available in the professional addition. The professional edition also comes with email support and unlimited access to 2.X released of Gitora. We think the benefits you will get from Gitora Professional Edition will far outweigh the small price tag we put on it.

We know that large enterprises usually have their own unique needs. They might need customizations, new features, integration with other products and services they use, training, more timely and intensive support covered with an SLA etc… For these types of customers, we offer a fully customizable version of Gitora.

Gitora 2.0 Professional Edition comes with a long trial period and even if you decide not to purchase it, it gracefully downgrades to the community edition.

So what are you waiting for? Go download Gitora 2.0! 🙂

Outside of the Database World (Java, JavaScript etc..) developers use version control systems more effectively. When used appropriately in the software development life cycle, a version control tool can shorten delivery times significantly by improving the manageability of the code base.

Using version control with PL/SQL (and other database objects) has always been challenging. In our experience very few, if any, IT departments use version control systems to manage their database. Most are content with a basic check-in check-out mechanism.

We created Gitora to help database developers manage their code base better. Gitora achieves this by bridging the gap between the Oracle Database and Git, the most prominent and popular version control system used by millions of developers around the world.

Gitora can be used in collaboration mode in which all database developers work in the same Oracle Schema(s). In this case Gitora supports a check-in check-out mechanism. This check in/out mechanism is tool independent. It works with SQL Developer, TOAD and PL/SQL Developer (or any other tool for that matter).

More importantly, Gitora can also be used in parallel development mode in which every database developer works in her own schema(s). In this way of working, (which is exactly how Java, .NET, JavaScript developers etc.. are working) each developer has her own copy of the database code and is free to make changes to them related to the task she has at hand. In parallel mode, no developer blocks the other because she is the only one who checks out the objects in her own schema(s). This improves development times significantly because more than one developer can work on the same logical object at the same time.

The software development team establishes a workflow to merge the changes of each developer and propagate these changes to the master code base. Gitora (via Git) also helps with this process with automated merging of changes. In the event of a conflict (where Git cannot figure out how to merge changes done by two developers to the same code unit) Gitora asks the user to resolve the conflict. Gitora creates multiple versions of the database code objects in question and helps the developers to resolve the issue. (Please see Introduction to Gitora, Git for PL/SQL developers for more information on this topic)

Best to our knowledge, Gitora is the only tool that is specifically designed to be used for parallel development with PL/SQL. We think parallel development is where a software team starts to get a lot of value from using a version control system. This helps establishing a formal workflow of incorporating changes to the master code base and to production.

For more information about Gitora, we recommend you to visit the following links:

Below you can find the recording and the slides of the Gitora Webinar. Thanks to everyone who attended. What a turnout!

Last week we did a webinar in which we talked about the integration between Formspider and Git. Gitora is a subset of this integration, so we thought the webinar might be relevant to you as well. Below are the slides and a recording of the webinar.